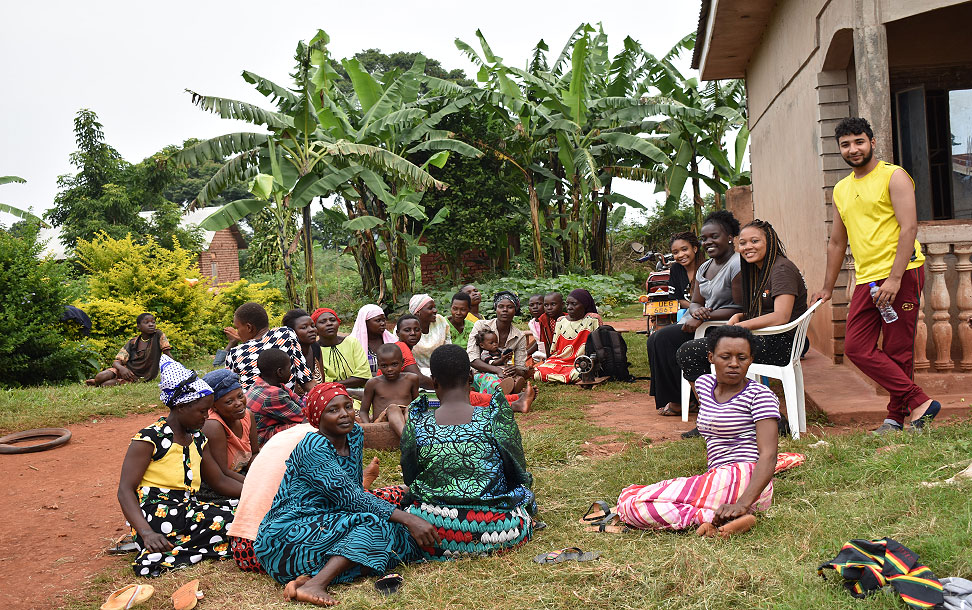 Tyler, Rebecca, Leanna, and Sikander; four students from Northwestern University’s GESI program; came together to begin a group project at Sustain Micro Enterprise (SME). SME is a local NGO that provides vulnerable women access to small business loans to start their own businesses to help generate income. SME also hosts business and financial management trainings for those that are receiving loans.

Within the project, the GESI group chose to work with one particular community of women called the Kamu Kamu group, located in the Nangurwe village on the outskirts of Bukaya, Uganda. Through an extensive interview process, the GESI students were able to identify some of the key strengths and challenges in the community to generate a project proposal. Getting to directly meet with the women individually and as group allowed the women to voice their key concerns and ideas. The problems mentioned by the interviewees were mainly related to challenges of income generation. Many interviewees touched upon the water crisis, prevalence of severe malaria, incidents of typhoid, unstable monetary flows and difficulty paying school fees. During the interview, the team also identified the strengths of the community which includes, but is not limited to, hair making, crafting, and sewing.

The goals of the project covered a variety of topics that would improve the overall well-being of the women: to build a greater sense of community; generate additional capital; improve general hygiene practices; mitigate malaria; and enhance the women’s sense of self. After the community assessment, the GESI team decided to set up a women’s community center using their seed fund to capitalize on the strengths of the community in order to generate income and to conduct a detailed health talk to disseminate information that could upgrade the general health standards of the community members. Topics identified for the health talk were malaria, typhoid, hand wash and sanitation. After conducting the health talk, the GESI group worked to help the women improve general health by designating a location for rubbish, creating tippy taps, and clearing bushes. By creating this women’s center, the GESI students created a new source of income for the KamuKamu group based on not only their skills, but also things they enjoyed doing. In this center, women are also able to go and learn new skills. By bettering the hygienic practices of the women, the GESI group hopes to decrease the time and money the women spend when they are sick and more time in their businesses.

The outcome of this project is that the KamuKamu group learned about important hygiene practices including the use of soap when washing hands. The community has also learned about the importance of working together. Lastly, the KamuKamu women’s center proved to be huge success and it will serve as a pilot program for a larger women’s center that SME plans to open in 2020.

Future participants and donors can help to support the project by creating women’s centers in other communities of women like the KamuKamu group as well as helping to expand this already existing center to offer other skills for the women to generate income.

Tweet
More in this category: Research on effects of and reasons for tungiasis in Busoga region »
back to top